As we know Kusadasi was founded by the Ionians connected to Ephesus in a place called Yılancı Burnu situated close to the city. Kuşadası is situated at a distance of 95 km (59 mi) to the south from the region’s largest city ”İzmir” but Kusadasi is a part of Aydın Province. Kuşadası has a population nearly 70.000 but rising to over half a million during the summer when the large resort fills with tourists plus the hotel staff, bar staff, construction workers, and drivers who are needed to work in the restaurants servicing all these visitors.

The name of Kusadasi comes from two words, ‘kuş’ (kush) (bird in Turkish) and ‘ada’ (island in Turkish) as the peninsula, that Kusadasi was built on, has the shape of a bird’s head. Kusadasi today remains to be the beginning point of the most of our tours to Ephesus Ancient City thanks to it’s nearby location. 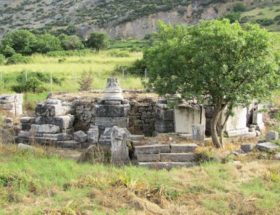