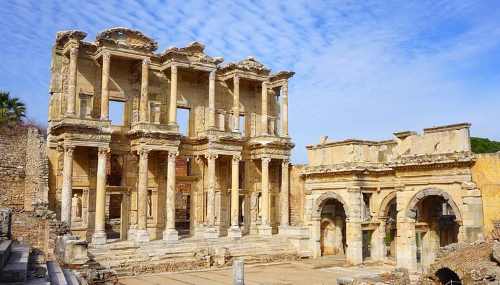 Between 12,000 and 15,000 scrolls were housed in the grand Library of Celsus. Designed by the Roman architect Vitruoya, the library was built in memory of Celsus Polemeanus, who was a Roman senator, General Governor of the Province of Asia, and a great lover of books. Celsus’ son, Julius Aquila, began the construction in 110 AD. The library was completed by Julius Aquila’s successors in 135 AD.

Celsus was buried beneath the first floor in a lead container inside a marble tomb. A corridor behind the north wall leads to the vault.

The Library of Celsus was remarkable not only for its size and its beauty, but also for its clever and efficient design. Over the nine-stepped free stairs flanked by two statue bases a vestibule can be reached from which the main library room was entered. The articulated architecture of the pompous façade contrasts with the brick-laid technique of the building’s interior although the floors and walls were reverted with marble. The library was destroyed during an earthquake around AD 270 and was not rebuilt. In the late antique period the remnants of the pompous façade served as the back wall to a street fountain. The re-erection was resumed during the years 1970–1978 with the financial help of A. Kallinger-Prskawetz.